If you want a bit of theatrical heaven, along with a smidgen of hell, a mini primer of late 60s gay history – with the obligatory nod to Stonewall included – and a lot of love, all both literally and figuratively, get thee to Midnight at the Never Get, the York Theater Company at St. Peter’s latest musical production before it closes on Sunday, November 4.

With a five-piece backup band, two talented leads, and a roster of original songs, about life and love, both found, lost, and found again, well the 90-minute Midnight at the Never Get, part theater and all cabaret, is the place to be.

Despite a couple of casually dropped clues, it took me a bit of time, as it did much of the audience, to figure out that the play’s two lead characters, though very much alive on stage, are fully dead in the story. In fact, singer Trevor Copeland (Sam Bolen), already in heaven when the play opens, is waiting to be reunited with the love of his life, the recently diseased pianist and song writer, Arthur Brightman. Sitting in for Brightman, is actor Jeremy Cohen, who, as the ever-inventive Copeland informs us is only a glorified memory of Brightman, more fancy than fact.

“Midnight” is essentially a memory play in which Copeland recounts – in some 13 song and dance-wrapped snippets – his life from when he first left a small town in Idaho somewhere in his mid- twenties to come to New York City. We learn how he pursued a singing career, met and fell in love with twenty-something-year-old Brightman, created a popular once-a-week midnight show at the Never Get club until his virtual end on earth, dying, presumably of AIDS.

In between Idaho and heaven (or is it purgatory?) the majority of the play takes place in the late 1960s at the Never Get club, a barely legal New York City Greenwich Village hangout frequented mostly by gays. It is here, on brothers Christopher and Justin Swader’s one piano set with the unlit band placed at the back of the stage, that the lovely tenor-voiced Sam Bolen, as Copeland, sings his heart out while  waiting for Brightman to join him in heaven.

The play commences with a piped in announcement. It is the first inkling, though too soon to decipher, that we might be entering into an otherworldly situation. “Ladies and Gentleman, welcome to Midnight at the Never Get, a performance of rare taste and exquisite arrangement, a story of desperate intention, a song outside of time. It is my great pleasure to introduce to you now the storyteller, the singer, all that is left of Mr. Trevor Copeland.” Though Brightman has yet to be mentioned by name, it is here with Bolen singing The Mercy of Love, one of the productions more sultry ballads, that we hear that Copeland is hopelessly in love.

I’m at the mercy of love.

Caught in its power

Each passing hour tears me apart

I used to stay cold when passion took hold.

No matter how deep

I could keep it controlled

That was a halcyon time

I’m at the mercy of love.

Out of my mind with love

Don’t let it in

But the heart wants

What the heart wants

And I die at its whim

I’m at the mercy of love

My heart wants him!

While many of the songs Copeland sings talk of love, other are quite comedic. Sticking out like a sore thumb is My Boy in Blue. It is a mock love song to the policemen of the 60s who raid, harass, and arrest patrons found in the then illegal gay bars.

I feel a kind of joy

I haven’t felt in ages

I met a pretty boy

He owns a gun

I love him, I really do

My boy in blue

I think the future’s bright!

Though there is some frustration

I spend it at the station.

His Pontiac is green and black

The trouble is I always hafta sit in back

But I love him, I really do

He isn’t all that tender

But when he’s on his beat

Oh I’m not on the lam

But who gives a damn?

He swears he’ll always bust me

Jus for who I am!

I love him, I really do 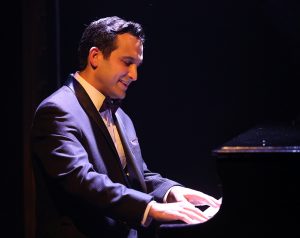 Though it is love that mostly fills the air at the beginning of Copeland’s and Brightman’s relationship, when the song-writer composed countless love songs inspired by his love for Copeland, the road turns quite bumpy when outside forces penetrates their delicately balanced cocoon. First their weekly midnight show gets axed when the owner of the Never Get club unexpectedly dies. Next, a major record company, with no interest at all in Copeland – obviously he is too gay-acting for them – wants to sign singer-songwriter Brightman to a contract. Suddenly, all bets are off, as Brightman set wildly aflame by ambition, and yearning to be a household name, turns Copeland’s apple cart upside down.

Though the story, albeit a bit of a mishmash, is a commonplace one, lifting the show skyward is the accomplished piano work of Jeremy Cohen who only sings a few songs, both suavely at that. As far as the play’s attention grabber it is the insistent vocal beltings of tuxedo clad Sam Bolen (the play’s co-conceiver) which has him delivering many of Mark Sonnenblick’s cleverly-worded Great American Songbook sounding songs (think Cole Porter, Irving Berlin, Gershwin, and even the Britt Noel Coward), in the show-stopping style of the late great Ethel Merman. Sometimes this worked, and sometimes it didn’t. However, it never failed to bring a great big smile to my face. Such is the salesmanship of Sam Bolen

Directed by Max Freiedman, Midnight at the Never Get opened on October 11, 2018, following a week of previews at the The York Theater Company at St. Peter’s, 619 Lexington Avenue in New York City. It is slated to close on Sunday, November 4. The show runs approximately 90 minutes. Tickets are available by phone at 212- 935-5820 or online here.

0
0
0
0
0
Geva Theatre presents case of ‘Thurgood’ through Nov. 16 Fans, not critics, will crown Kong as King of Broadway

‘You Will Get Sick’: Surreal, So Real and Otherworldly